Not being able to see for yourself that the horizon curves, or not, is one of the main reasons some people are sceptical.

And they should, because it is nearly impossible to see for yourself that the earth is curved. So who to believe: Your own eyes? Can you?

Why is it difficult to discern flat from round?

It is because the world is so big. It is very hard to imagine a thing you cannot see for yourself.

Living in the Netherlands, which is quite flat, in the sense that our highest 'mountain' is 322,4 meters above sea level. I myself live a few meters below sea level. On a good day I can see a lighthouse 30km away. On average I could see 40km max, because of the weather.

But could I detect curvature on the ground? And what do we expect to see?

Actually there are 2 curves we might expect and 1 other we might observe.
One we might expect is a side way curve. Like you stare out at sea, and expect to see the left and the right to be lower. But that would be strange wouldn't it? Because what you see in front of you is the horizon. At eye level and where you (or actually your brain) expects the horizon to be.
But if you turn a few degrees to your left... wouldn't the horizon be right at the same height? So how can it drop? Would you actually be able to see that drop?
I will try to explain that in another article.

The other we might expect is the drop of the horizon. Like watching a boat 'sink' below the horizon.
Well. That is a toughy. Because at first sight: That is exactly what seems to happen!
Until you get some binoculars and they reappear. And then it vanishes again.
And people have made observations of object that are further away than would be possible on a round globe.
On a round globe model this is explained because the atmosphere, and all the layers of different air temperatures acts like a lens. It is called refraction.
On a flat earth model this is off course explained by there being no curvature at all. And the distance and magnification eventually let object disappear from sight.
I will discuss this in more detail in another article.

O but wait. There was this other curve that we might observe. What about that?
Well. This is when you would look DOWN while you go up. Eventually you would be able to see an edge of the world all round you. This will either be the whole (flat) world, or half (or even slightly less than half) of the round world.
We do have pictures of that. From space. And I do believe we are in space on ISS.. but that again is another subject for another day.

And finally there is one observation, that has nothing to wth seeing a curved horizon, but has everything to do with seeing the edge. When you go up, and look straight ahead (water level) you would be able to see the horizon drop.

The only fact that remains is this:
You and I, with our own eyes and means cannot tell a round earth from a flat earth. There are just too many obstacles.. literally.

Watching Items disappear over the horizon

Have you ever watched a ship disappear when it sailed away?

It is one of the most discussed subjects in the flat earth debate. Do you watch it disappear because it gets smaller, or because of the curve of the earth.

But seeing is one thing, discerning the truth is something else.

This has a lot to do with the limit's of how far we can actually see (because of the haziness (water vapour, pollution) of the air), perspective (things look smaller over greater distances) and then there is this thing called refraction (caused by layers of air of different temperature), it messes with light going in a straight line.

My guess (I cannot proof it) is, that is actually harder to see at sea. This is because refraction get worse when the difference in temperature increases. Water has a great capacity to store heat, and takes longer to get warmer than land. In winter the sea is warmer, in summer colder. This creates a big difference in temperatures between the surface and the air.

So lets get into some 'evidence'.

So these videos do not proof a thing, it only makes it clear that relying on you eyes, or camera, alone is not enough.

So thinking about this I thought: 'We need bigger things' and we need to get rid of the shimmering effect of refraction. So like a mountain. This would show it in a better way.

And luckily some people did exactly that.

What is explained here is that taking into account the perspective (both in flat and round) a mountain that is higher but further away, should still be visible above the mountain in front. However it is not. And atmospheric disturbance could never account for that. Actually the people defending the flatearth model agree on this particular example (well not directly, but still (See 'next part').
So is this proof the earth is round? No, because that is not how science works. It is a whole lot harder to proof something, than it is to disproof something. Sorry.

This one video is showing the same thing. Again, the refraction is (as far is I can tell) taken off the table. And again it shows something opposite of what you would expect on a flat earth.
I have not seen a video that shows the same thing and show the flat earth model works.

An interesting observation though is the appearance of the Canigou mountains

So on itself this is tough. but do try it yourself and see.

On the page To prove or not to prove I will show you an example of a test, which seemed legitimate on first glance, but which proved to be wrong later on.

Together with other subject though it might become more... clear?

https://aty.sdsu.edu/explain/atmos_refr/horizon.html  it has more information of how the physics work

A good read is a post on quora where on a normal level (without name calling) the topic is discussed:

Another excellent site to visit http://walter.bislins.ch/bloge/index.asp?page=Flat%2DEarth%3A+Finding+the+curvature+of+the+Earth

So if you rise above the earth... what will you expect to see.

The horizon as a ring? No. You wont, not unless you go up for a very long time. Because imagine: When you look in front of you, the horizon will appear at a certain height. When you move a bit to you left, the horizon should be on the same level, would it not? This is because you are either on the top of a ball, or above a flat plane.

But what you will be able to see is the horizon dropping, both in flat as in round world. 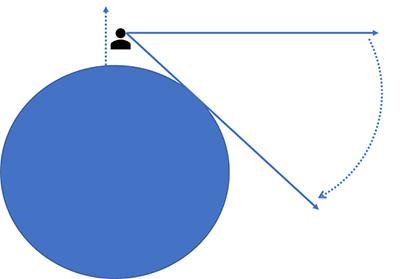 For the same height the drop on a curved plane would be far bigger than on a flat plane.

But still.. These pictures above are not scaled.
In a globe world where earth has a 6.378km radius. When you are 30km above sea level the drop would be like the width of your hand when you hold it at arms length before you.

And if you scale the picture above it would look like this:

There are a number of experiments, where a camera is attached to a balloon

A very new one is from Dwayne Kellum:

Below is a nice simulation of rising in a balloon (it is in Portuguese) or you could have fun in google earth. If you download the video and play it locally (in VLC mediaplayer for instance) you can actually pan the view and look around.

Lastly A great youtube site is from vsauce and especially (on this subject) "How Much of the Earth Can You See at Once?"

To prove or not to prove

Proving something like the curvature of the earth by getting some sort of signal over a flat surface is very difficult. The following set of video's will show that 1 measurement, however carefully done, is not enough. You have to look at all the different circumstances in which some phenomena could be proven right, or wrong.
Proving some thing is not easy, as a lot of circumstances might yield the same observation. That is why you have to do multiple, repeatable, tests, preferably on different locations, to see if it is a fluke or something real. And then you have to ask the question: How? And try to disprove your own observation.

The video was shared across the community and commented on, e.g. by jeranism who elaborates on the video, and tries to explain the numbers behind the test.

So while this seems a good setup (they even explained how they did it),  the question that was not asked is: How? What explanation, besides the earth being flat, can there be that the light source was visible? Do my calculations match my expectations? Are there other objects, besides the light source, that can or cannot be seen?

In short: A lot of the lower part of the opposing side of the bay is not visible, but the light is? And the light source is even visible on the same height as the road, 10 meters above their level.

This video (by Bob the science guy) goes further and tries to compare two separate events, to see how that fits..

This next video (by Bob the science guy) goes even further and seeks an explanation of how the light could be visible at that height.

In short: The light is visible as a big blob and that has to be accounted for. Also the fact that it is visible on a higher point (the road) than it should have been leads to an example of refraction using a warm surface and cold air.

And even this might not explain the whole picture, because the question remains: Why is a light scattered and visible, while the shore is not..

Anyway.. this sequence shows that even though an experiment might yield a result, you can never proof something wrong, or right, from one experiment.