Former President Bill Clinton in his 2004 autobiography, My Life, states: "Just a month before, Apollo 11 astronauts Buzz Aldrin and Neil Armstrong had left their colleague, Michael Collins, aboard spaceship Columbia and walked on the moon...The old carpenter asked me if I really believed it happened. I said sure, I saw it on television. He disagreed; he said that he didn't believe it for a minute, that 'them television fellers' could make things look real that weren't. Back then, I thought he was a crank. During my eight years in Washington, I saw some things on TV that made me wonder if he wasn't ahead of his time."[2]

Was Bill Clinton doubting the moon landing, as a president, or was he stating that you should not believe everything that is shown on tv. As a president he must have had access to all information available.

The reason we did not go to the moon, or any other country, is because it was too difficult, according to the video maker.

The reason provided by the governments is that is is too expensive, which you can see below. 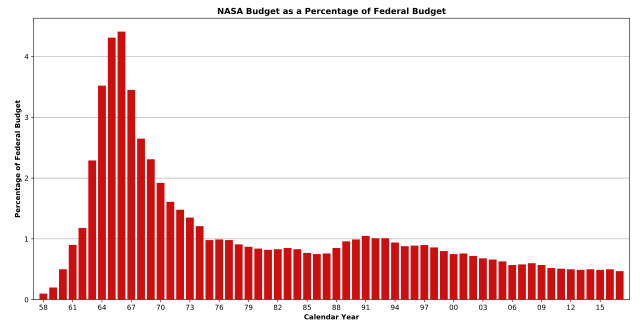 The Van Allen belt prevent is from ever going there.
Van Allen (in march, 1959) himself states at 8:08 that "it a human being exposed to even 10 rad would die in 2 days, and that it will be an obstacle.".

Just below that highlighted passage he writes "Unless some practical way can be found to shield space travelers.., manned space rockets can best take off through the radiation free zone over the poles." You can read the whole article here
And that is exactly what they have done, quick and through a small region.

Apollo 12 Astronaut Alan Bean:"I am not sure we went far enough out to encounter the Van Allen radiation belts. Maybe we did.".

I am not sure what he meant.to say

The temperature would have been took big a problem

The temperature on the surface reaches 135C in the sun and -150C in the shade. The module had climate control for that, powered by batteries. That was the reason of the short visits.

First of all: The lunar landings took place at either the lunar morning, or evening on the spot where they landed. This was primarily so that they could see the surface (in a full moonlight there would be no shadows), but also because the radiation level would be lower.

However the space suits reflect almost 90% of the light (and heat), and secondly the regolith ('moon dust') does not conduct heat very well.
And there is a reason the space suits are so big. The batteries in the space suit were mostly only for body heat disposal. 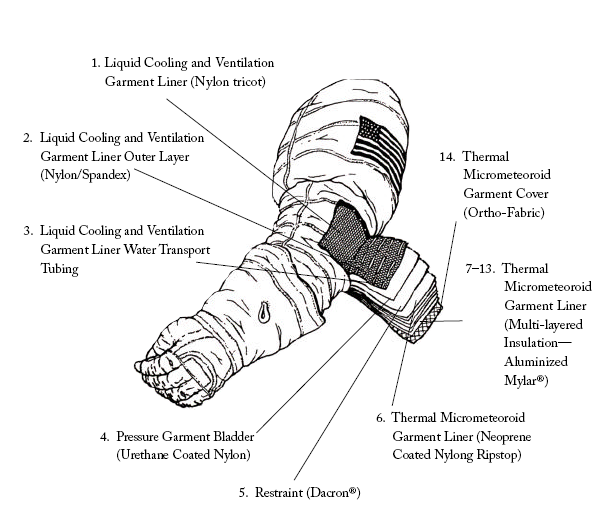 Later on in this clip (at 16:05) they state that in a vacuum there is no heat dissipation. That goes both ways: There is no air to get heated, so the only source for temperature rise is the radiation.

The narrator states "Does it seem a bit beyond 1969 technology".
Yes. That is way it took such a long time, with a lot of money. It was not simple, and it still isn't.

From here on to the next item is a historic overview of how we got to where we are now?

"It is commonly believed that man will fly directly from the earth to the moon, but to do this, we would require a vehicle of such gigantic proportions that it would prove an economic impossibility. It would have to develop sufficient speed to penetrate the atmosphere and overcome the earth’s gravity and, having traveled all the way to the moon, it must still have enough fuel to land safely and make the return trip to earth."

Further in the text (read extract) however he states that a space station would be possible in 1967. 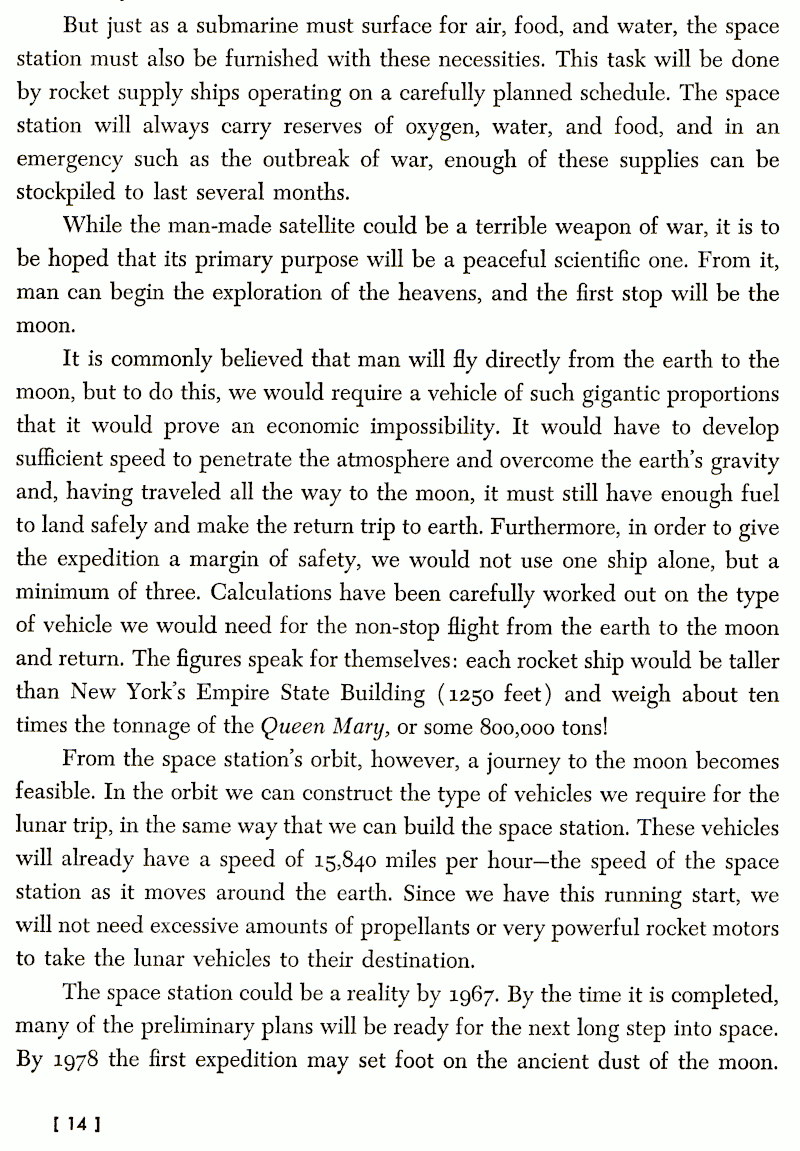 In 1961 an engineer, John Hobalt, proposed a multi part rocket (with several stages) and especially the landing module. Van braun did not like the idea and blocked it several times, until the end of 1961 when he finally agreed. See another documentary on the development of the lunar module https://youtu.be/Ra0GAhvp2-g?t=175

Gus Grissom had a lot of critique on the program, and is supposedly killed on the pre-flight test of the Apollo 1 mission.

He was probably right in his critique as a whistleblower bu the name of Thomas Ronald Baron reported the same, and died under uncertain circumstances.

But what is this proof of? A conspiracy to cover up failure? And would they have blown en rocket for that? Who knows..

It shows that a chamber full of pressurised oxygen is a bad idea.

What follows about hitler does not add to the believability of being able to go to the moon. And even this whole part is both speculation and shows that the program at the Apollo 1 stage was far from complete, which is why it took four missions more to put a human into space with Apollo 7

The interview with Armstron, Collins and Aldrin.

They looked disinterested.
Well, they just had been on a long journey and were tired, how would you look?

They do not recall seeing stars on the lunar surface, while. Collins also said: "I don't remember any", while he did not go to the moon himself.
Also his statement was attributed to Aldrin

However Aldrin was speaking of the time they were watching the corona, and of course the corona could not be seen without protection.
Collins at that time was taking pictures of the corona also, from the command module. This he remarked upon.

So this is one 'glitch' even if it is.. on the whole interview, after 44 minutes in the press conference..

The rocks taken from the moon are meteorites from earth, gathered by Van Braun,

No proof is provided.. Actually scientists have confirmed that the rocks cannot have come from earth, because of the lack of H2O.

Evidence on the moon. Like the laser reflectors.They are being confirmed in the video.
This is how the distance to the moon is measured.

At time 37:18 an explanation is given that it could be done without a reflector. The original documents are provided at http://www.futile.work/moon.html
A BBC documentary shows the complexity to do this.

The waving flag as an astronaut skips by.

The flag is motionless almost all of the time, how did they do that. And as to the how? See the video moon flaggin' on that.
"The waving flag as an astronaut skips by" was from apollo 15.
It looks like ... air. However it is hard to see, because there is an astronaut in front. Also there is not a single other example that shows this behaviour.
Other possible explanations are: Ground vibrations, Dust kicking up, Static (the flag was simple nylon). The dust is also very elect
And nylon and teflon can be negatively charged and teflon positively.
However the flag oscillates longer than it would on earth...

Astronauts cannot jump over 6" high, while the gravity is 1/6 that of earth

Why would they jump at that time. It was dangerous, so they were careful, they are not children.

The photo's are to perfect

Only the best are published.

The camera tilted on lift off.

This comes from 'A funny thing happened on the way to the moon'.
They show only part of it. As is explained on a video of GreaterSapien, you can check yourself
So this is typical of

The rest of the movie is just repeat and gossip.

So.. what is left after analysing this? In my opinion. Not really anything. If this is what people think that is making a hoax, than they are reading things in a few items and talking it their way, sometimes without proper research and looking both sides.